A couple of weeks ago I attended my professorial inauguration.

In most universities (in the UK and Ireland, anyway), a professorship is just a job that doesn't involve any particular ceremonial: it doesn't come with a degree, and so doesn't require a graduation. In St Andrews, of course, things are rather more formal. All new professors have to attend a St Andrew's Day graduation in order to swear an oath to the university. I should have been inaugurated last year but couldn't make it because of a prior engagement, so this year I attended along with my colleague Aaron Quigley and ten other new profs. 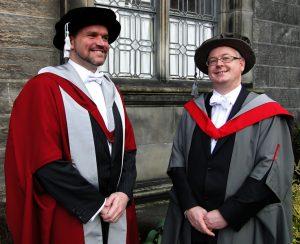 The day took place in sub-zero temperatures with swirling snow at times, despite St Andrews overall having the mildest climate in the UK: I had to stay up overnight just to make sure I'd make it in, since commuting in from Edinburgh as usual would have been a bit risky.

We started in chapel for a thanksgiving for graduation, where I discovered that the "school song" (or at least the hymn to St Andrew) is sung to the tune of Deutschland uber alles, for reasons that remain unclear. Immediately afterwards was the graduation ceremony, held next door in the university's Younger Hall.

Like most "ancient" universities, St Andrews' graduations are full of symbolism. Most of the important parts of the ceremony are conducted in Latin,although not to the extent of excluding all English as happens in Cambridge and in Trinity College Dublin. The academic procession happens juniores priores, with junior staff preceding senior -- and new professors coming first of all, since they're regarded as nobodies until inaugurated. We sat at the front of the hall while the other academics processed into the stage, and waited while the undergraduate and postgraduate degrees were conferred -- which involves being hit on the head with the birretum, a piece of cloth allegedly taken from John Knox' britches.

Academics always play spot-the-gown at these sorts of events. There are basically two classes of gowns. University officers performing their function wear gowns related to their office, so the Principal, while officiating, wears a black-and-white Principal's gown rather than the one for her Harvard doctorate. Regular academics wear the gown related to their highest degree, with the colours, hoods and patterns being determined by the awarding university. A lot of doctoral degrees involve red and gold; St Andrews doctorates are sky blue. (Mine is a fawn/grey gown and hat with a red hood, being a DPhil from the University of York. It's quite understated in comparison to a lot of others, which suits me fine.)  St Andrews is unusual in also having an undergraduate gown, different to the gowns for graduates, which is bright red and made of fleece rather than cotton. Useful for keeping warm on the pier walk. A surprising number of undergraduates wear their gowns around town, which just goes to show the bond that exists between the university and its students, and isn't something one encounters in many other universities.

The inauguration of new professors involved us all coming onto the stage and being asked to swear the oath to uphold the rules and traditions of the university (in Latin, of course -- the important word was polliceor, "I so promise"). At this point I discovered the term for computer science in Latin: computandi ope machinali promovendae. After that we were each presented with a book as a token of our new office (which they took back immediately after we left the stage, although they did buy me a nice copy of Hugh Trevor-Roper's "History and the Enlightenment" later, with a commemorative bookplate in it). The Principal then addressed us, in Latin again: Quod felix fortunatumque sit, spartam nacti estis: hanc exornate ("I wish you all happiness and good fortune. You have been allotted Sparta: do it credit."). And it was done. We processed out of the hall (in reverse order, seniores priores, this time) and back to the main quad of St Salvator's college for photos in the snow and lunch. There was a garden party in the afternoon (thankfully in a heated marquee), and a formal graduation dinner in the evening.

Several years ago, after I got married, someone asked me whether it had made a difference to how I felt. I replied that I'd expected the answer to be "no", in that the important thing was the deciding to stay together and not the piece of paper and the public promise -- but that in fact it did make a huge difference. The public act had a significance in and of itself (for me, at any rate), and did make the whole thing feel more real and more certain. Slightly surprisingly, inauguration feels the same way. In practice it makes no difference to my holding or doing the job, but the public act gives a significance to it that I wasn't expecting (again). The common theme between the two situations may be that the commitment is two-way, between myself and my university colleagues and students in this case. A number came up to me afterwards to welcome me -- despite my having been here for over a year -- which makes one feel rather wanted.

There's a lot to be said for ceremonial like this. It's important for the students, of course, to mark their achievement: but it's perhaps equally important for the academic staff, for holding an institution together, especially at times like these when there's something of a feeling of being under siege in a world that doesn't necessarily understand or appreciate what universities are for or what we're trying to accomplish. The coming-together to mark key events, and to affirm that a university is a community with shared goals, is something that can only be good for morale, and is something we should do more of.